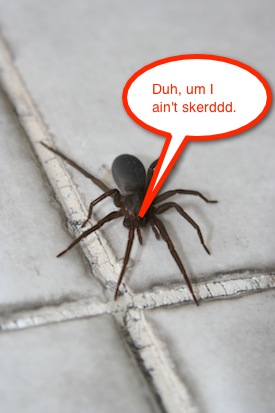 The dread Fear of Failure can strike at any age. And it does.

The rumor is that everyone has it. Can’t escape it. We’re all stuck because of its paralyzing effect. It’s an ever-present ogre hiding in the dark corners of your life waiting to dash your dreams to pieces should you even think about chasing them.

Eh, kinda. It’s no where near as powerful as you think it is, when you look at the guts of it. Shall we?

“So, yeah… uh, I was doing that thing we talked about and then all of a sudden this other thing happened. I never saw it coming. I was so sure we were going to win. I thought we had this locked up! This freaking sucks! I’m sorry, man. I’m sorry I failed you. This is so embarrassing. Probably would have been better if we hadn’t even tried it. We never would have won anyways.”

The source of fear in this example is easy to see if you know what you’re looking for.

What’s so damning about that comment? The answer has nothing to do with actual failure. You were not born with the fear of failure.To unmask the ugly beast, first step is to define what failure really is. What is it? (This time Webster’s can stay on the shelf).

When I fail at something these three things must be true:

Hmmm… failure start with those three things. Doesn’t sound all that bad does it? And if the outcome wasn’t as anticipated, we assume we’ve failed, but what we’ve really done is acquire fantastic data about the forethought, the process, the effort, and the result, doesn’t that sound more like a test result to you?

I never got better than a “B” in any college science class, but sounds to me like failure in this context is nothing more than a test result in the laboratory of life.

Can you see that?

Those test results power the success of the action taken, and get you one step closer to achieving the desired outcome of proving the hypothesis, if you choose to look at it that way.

Let me ask you point blank: With the paradigm of a scientist’s experiment in mind, is there anything inherently bad about failing at something, or collecting data from a test result?

Quite the contrary, failure is a good thing. It’s positive, always. There is so much we can learn from results or the lack thereof.

Failure teaches us what we can do better, different, stronger, faster, more efficiently, more often?

Failure is the life of a scientist. It’s expected and welcomed. The brilliance of it is this: scientists still change the world through constant failure, and so can you.

You and I are no different, we can fail every day and still win the marathon.

So if a scientist, or a practitioner of life like you and I, were to do research, collect data, make an hypothesis, frame an experiment, perform experiment and measure the results to only find out his hypothesis was unsupported and then quit, on the spot, because of we didn’t get our desired result… is that logical, ethical, productive?

Not only is it illogical but we’d have absolutely nothing good/pleasant/fun/fulfilling/convenient in this world, or our lives, if we throw in the towel.

But that’s exactly what people do every day. They quit on themselves because of one single piece of feedback (which had nothing to do with you).

“Oh, I tried that already and it didn’t work.”

OR… even more common is the person that doesn’t even start because they anticipate that they’ll meet with failure.

Because you’re scared of failure?

Nope. It’s deeper than that.

The truth is, you’re not scared of failure at all. You’re scared of yourself.

It’s true. If you were so scared to fail, you’d literally run and hide from every aspect of life, not just the new, out-of-the-comfort-zone valuable stuff.

If I was so stuck on my failures I wouldn’t bother to get out of bed in the morning. Heaven sakes… I love sleeping. I could sleep in like a champ, and then take five naps to avoid doing anything.

So why is there a powerful, perceived fear of this so-called failure?

We don’t stop to realize that failure has nothing to do with you. We’re terrified of the test result as if the test result itself is proof positive of our obvious ineptitude and the cruel world’s grand jury will sentence us to a life of lack and ridicule because we failed… once.

It seems as if we’re terrified of the feedback that trying something new or challenging ourselves to step out of our comfort zones will bring.

But no, we’re scared not because of the thing itself, but because we associate the “test result” with our own self-identity, self-esteem, self-confidence.

Because if I fail, then that must say something about me and who I am. I must therefore be a failure myself, because only failures fail. Wrong.

For those frozen in fear, there’s little to no distinguishing factor between the experiment, the test result and the scientist. We just throw them all in the same bucket and label it “me”.

When you read it like that, sounds silly don’t it? But that’s the default internal dialog of human beings, and it’s so backwards from reality.

Am I a failure because I’ve failed? No! Not even close. I win, because I fail. And so do you. You’re successful because you dared to fail.

Failure does not define you. Ever. The fact that you fail at something actually proves just the opposite, that you had the guts to get in the game. That’s friction’ awesome.

Where does that crazy strong fear come from then?

If you’re reading this, I know something about you.

You’ve got this little itch in your heart that pushes you to achieve something better for yourself and your family. Listen to it, but don’t scratch it. Let it push you to achieve and step out of your comfort zone to find successes through the imminent failures of life.

Too many people give too much credit to the uncomfortable feeling you get when you challenge yourself, step out of the known and in to the unknown, or allow yourself to be vulnerable.

Don’t run from that feeling. Embrace it. Those feelings are evidence that your life is going where it should. That you’re growing where you should.

A real life of progress is one that plows through uncertainty.

So how do you do that?

How to Overcome the Fear of Failure

First, you must find out who you really are, who you are NOT (you are not your failures) and get clear about where you’re going.

If you knew who you are and what you’re capable of, no test result would ever stop you and you wouldn’t hesitate to step in to that space of vulnerability where the possibility of failure is present.

You were born to progress, not be a stagnant robot. By the very nature of being human, you are above the failures of life. They don’t define you, the just point the way to your best life. Your yellow brick road is lit by the failures you rack up by being human.

Second, you must adopt a productive mindset that breeds success and not failure. Kinda like this:

The evidence is all around you. Just open your eyes. [Insert example of any successful person and they will have failed a gazillion times]

Back to the question I posed at the start. What’s so damning about that comment? It’s the fact that he allowed failure to define him and therefore control his actions, his thoughts, and his future. The failure then breeds fear which causes damnation, or a stagnation of progress.

Failure is a test result that brings you closer to the success you deserve in life, not further from it.

You’re going to prove me right by allowing yourself the great pleasure of failing today. Go out and fail responsibly.

“It is not the critic who counts; not the man who points out how the strong man stumbles, or where the doer of deeds could have done them better. The credit belongs to the man who is actually in the arena, whose face is marred by dust and sweat and blood; who strives valiantly; who errs, who comes short again and again, because there is no effort without error and shortcoming; but who does actually strive to do the deeds; who knows great enthusiasms, the great devotions; who spends himself in a worthy cause; who at the best knows in the end the triumph of high achievement, and who at the worst, if he fails, at least fails while daring greatly, so that his place shall never be with those cold and timid souls who neither know victory nor defeat.”

— Theordore Roosevelt, Excerpt from the speech “Citizenship In A Republic”, delivered at the Sorbonne, in Paris, France on 23 April, 1910.

This site uses Akismet to reduce spam. Learn how your comment data is processed.

Next Post: The “What Do You Do” Complex and Society’s Identity Snitch